The Acquisition of Peter Keil 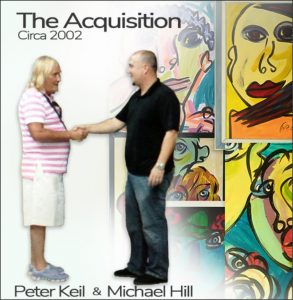 The year was 2002 when Michael Hill met with artist Peter Keil and acquired a massive collection of art. Never seen by public eyes until now, we are excited to invite you to join us July 15th 2020. This sale will only feature art by Peter Kiel. 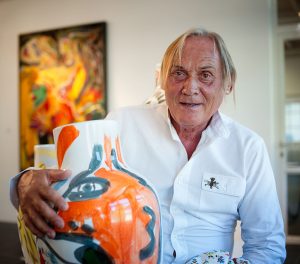 Peter Robert Keil (born August 6, 1942) from Zullichau, Brandenburg, is a German painter and sculptor. In the beginnings of his artistic career, Peter Keil’s style was influenced by German expressionism. In the works from his early Berlin years, he mainly focused on typical big city settings and characters on the fringes of society. However, his style changed visibly at the beginning of the 60’s when he lived in Paris for a while and emerged in the city’s nightlife. Keil increasingly parted with his realistic approach and developed a new, much more spontaneous and dynamic painting style which he developed further during his years in London and finally during his time as one of the “Berliner Neue Wilden” at the beginning of the 80’s. Since then, the use of intensive to lurid colors and the absence of realistic representation have become characteristic of his painting style. In his paintings, the color is applied with quick brushstrokes and occasionally with impasto techniques and the images are additionally abstracted by the use of Graffiti elements. Keil prefers to paint human figures, portraits, big city scenes, landscapes and still life images of flowers. His emotional way of painting is mainly driven by a desire for freedom from social constraints and conventions. In the past 50 years, he has created numerous large- and small scale paintings in oil and mixed media on canvas but also some sculptures in wood and steel and a great number of majolicas.

We are using cookies to give you the best experience on our website. You can find out more about which cookies we are using or switch them off in settings.

This website uses cookies so that we can provide you with the best user experience possible. Cookie information is stored in your browser and performs functions such as recognising you when you return to our website and helping our team to understand which sections of the website you find most interesting and useful.

Strictly Necessary Cookie should be enabled at all times so that we can save your preferences for cookie settings.

If you disable this cookie, we will not be able to save your preferences. This means that every time you visit this website you will need to enable or disable cookies again.